Get To Know More About the Surgical Treatments We Offer

Hair transplant surgery is the most effective anti-aging procedure for men. You can look younger and feel better with our FUE and FUT procedures. Gelman Hair Restoration is the most experienced clinic in Melbourne Florida and Brevard County. We offer FUE featuring the Neograft System and FUT with Trichophytic Donor closure.

Our approach to hair transplantation is to apply the highest standards of plastic surgery and an artistic approach to hair restoration surgery, with results that are exciting and life-changing.

Gelman Hair Restoration is the only clinic in Brevard County that offers FUE (Follicular Unit Extraction) and FUT procedures. Our team has over 15 years of experience in Central Florida. We employ full-time technicians at our Melbourne Florida office who specialize in hair transplant surgery. These technicians are Certified in Neograft, ARTAS, and FUT techniques.

A strip of scalp is removed under local anesthesia. The wound is then sutured back together, and this piece of scalp tissue is then cut into small pieces of tissue called grafts which are then transplanted back into the thinning area of the patient’s head. This method will leave a linear scar in the donor area, which should be covered by a patient’s hair (if long). The recovery period is around two weeks and will require the stitches to be removed by medical personnel.

Individual follicles of hair are removed under local anesthesia. This micro removal uses tiny punches of between 0.6 mm and 1.25 mm in diameter. Each follicle is then reinserted back into the scalp in the thinning area using a microblade. Because individual follicles are removed, only small, punctate scars remain and any post-surgical pain is minimized. As no suture removal is required, recovery from FUE is within seven days.

Follicular Unit Extraction, also known as FUE, is a hair transplantation procedure that allows the patient to keep their donor hair very short with no apparent scarring. In traditional follicular unit hair transplantation, there is always a small linear scar where the hair that is removed is covered by the surrounding hair. If the patient later shaved their head, the scar may be visible. This is not the case with FUE since every follicular unit is individually extracted leaving the donor area virtually scarless. The trade-off is that the procedure takes much more time and usually involves a few hair strands transplanted at a time in comparison with a strip procedure. At Gelman Hair Restoration, we will review all options with you and help you determine the right procedure to accomplish your hair transplant cosmetic goals.

The primary rationale for the use of FUE is that a linear scar is avoided. Several proponents of FUE market the procedure as a technique that does not involve cutting, is less invasive, and does not result in visible scars. While a linear scar is not created with FUE, circular scars are created and can be invisible to the naked eye but well camouflaged by the hair that surrounds the harvested areas. Those tiny scars are usually 0.8 mm to 1.0 mm in diameter, and it typically heals very nicely.

Strip harvesting and FUE are both acceptable techniques for harvesting donor grafts. Each technique has advantages and disadvantages. FUE is well suited for patients who insist on not having a linear scar, among other indications. It may be an excellent choice for young patients seeking small procedures. Large procedures are usually done in two days. FUE may be the ideal choice for harvesting trunk, leg, and arm hair, and it is an excellent way to camouflage strip scars.

FUE can be done either manually or automated. Neograft FUE is a more recent technology of automated FUE. Automated FUE might help to offset some downsides of manual FUE procedures, such as operator’s distraction or fatigue, when performed by an experienced operator.

Gelman Hair Restoration is the leader for Neograft and FUE Hair Transplants for patients with hair loss from Jacksonville to Jupiter Florida. Our team led by Dr’s Imami and Gelman is the most experienced in Florida for Neograft and Safe FUE. We were the first hair restoration center in Melbourne Florida to provide the No Linear Donor Scar FUE procedure. If you live along the I-95 corridor and you are looking for an affordable and experienced Neograft doctor, call us for a free hair loss evaluation at (407) 351-9558.

Neograft is a great alternative to traditional FUT Hair Transplantation performed by clinics like Bosley and Hair Club for Men. This FDA-approved FUE procedure allows us to transplant thousands of hair strands in a single five-hour outpatient minor surgery. FUE, also called Follicular Unit Extraction, removes individual grafts that contain one to four-4 hair strands without removing a strip of the donor area. There are no sutures or linear scars.

Our technicians were the 1st in Florida to be certified in both Neograft and ARTAS Hair Restoration. This knowledge helped us choose Neograft to give our clients the best FUE procedure. We are able to transplant more grafts in a single session at less cost. To learn if FUE is the right choice for your hair loss problems, contact us.

Our Neograft prices start at $5,000 and do not exceed $10,000. We have financing available through CareCredit, up to 36 months interest-free. For many of our clients who come from South Florida and Atlanta, our staff can assist you with travel arrangements. Our office is close to Orlando International Airport and Melbourne Florida International Airport. 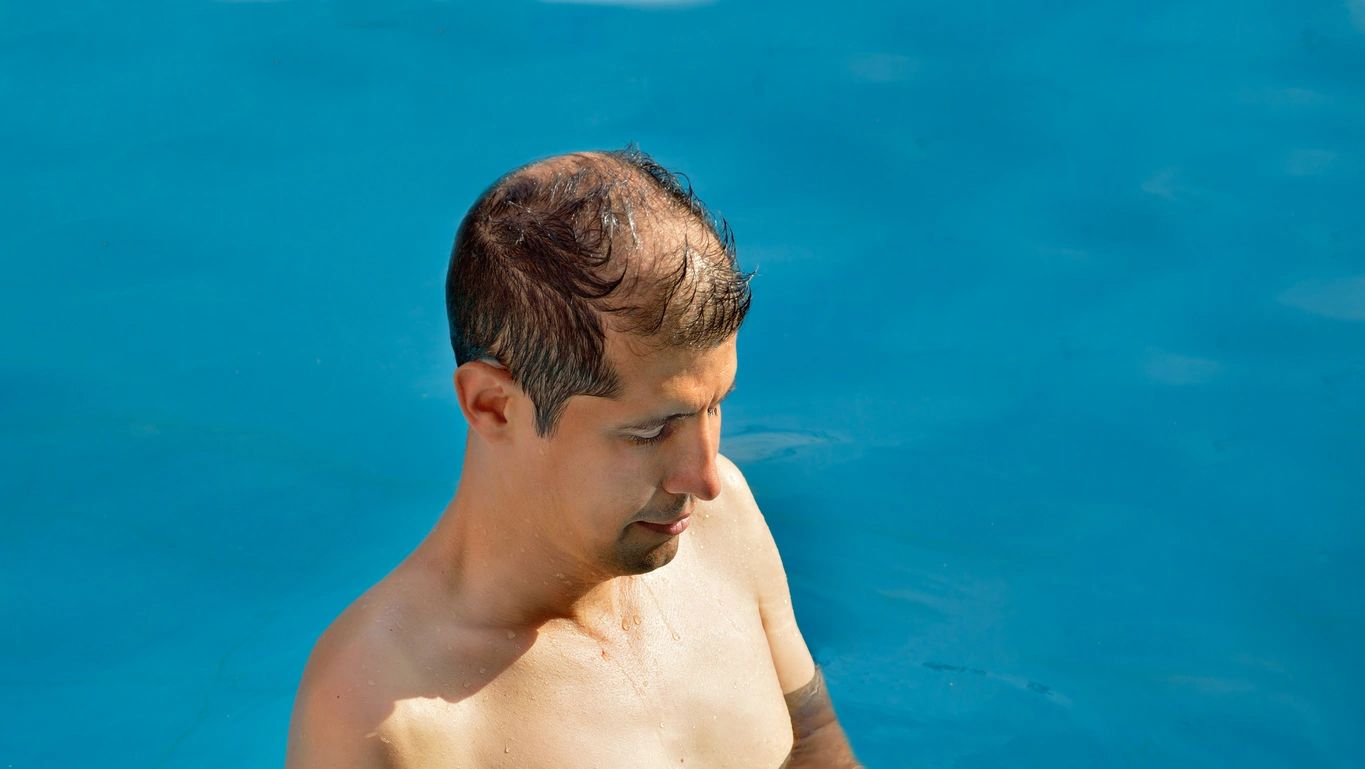 “I flew in from California for my Neograft procedure after researching Dr. Gelman and his team. I heard about them on the radio in L.A., I guess they have worked on some well-known athletes who had great things to say. The entire process was easy, I flew in had the Neograft done and flew back 2 days later. The cost was good, but the Team was very professional, I learned that they have been working together for over 10 years and it showed. Dr. Gelman knew his stuff and Nikka coordinated all of my travel and logistics.”
- Steve, Orlando

“I had a Strip procedure 11 years ago in New York, it didn’t come out the way I wanted it to, the hair grafts were pluggy. I researched hair clinics who did repair work and found Dr. Gelman. I spoke with him via skype and he agreed that FUE with neograft would help me. I flew in from N.Y. and had the transplant, they covered up the old plugs and fixed the scar. The price was reasonable, less than 7 thousand. I was a little worried about coming to Florida for my procedure, but my concerns were resolved within minutes of meeting the team. Consider Gelman Hair if you need old hair plugs fixed.”
- David, New York

Our practice has been performing reconstructive surgery for over 20 years, and we routinely correct poor, defective, and incomplete hair transplants performed by others.

You don’t have to live with unsatisfactory results. Call (407) 351-9558 for a hair transplant repair free consultation with one of our experienced plastic surgeons and to discuss the latest techniques that can revise hairlines and create the natural undetectable result that you deserve. 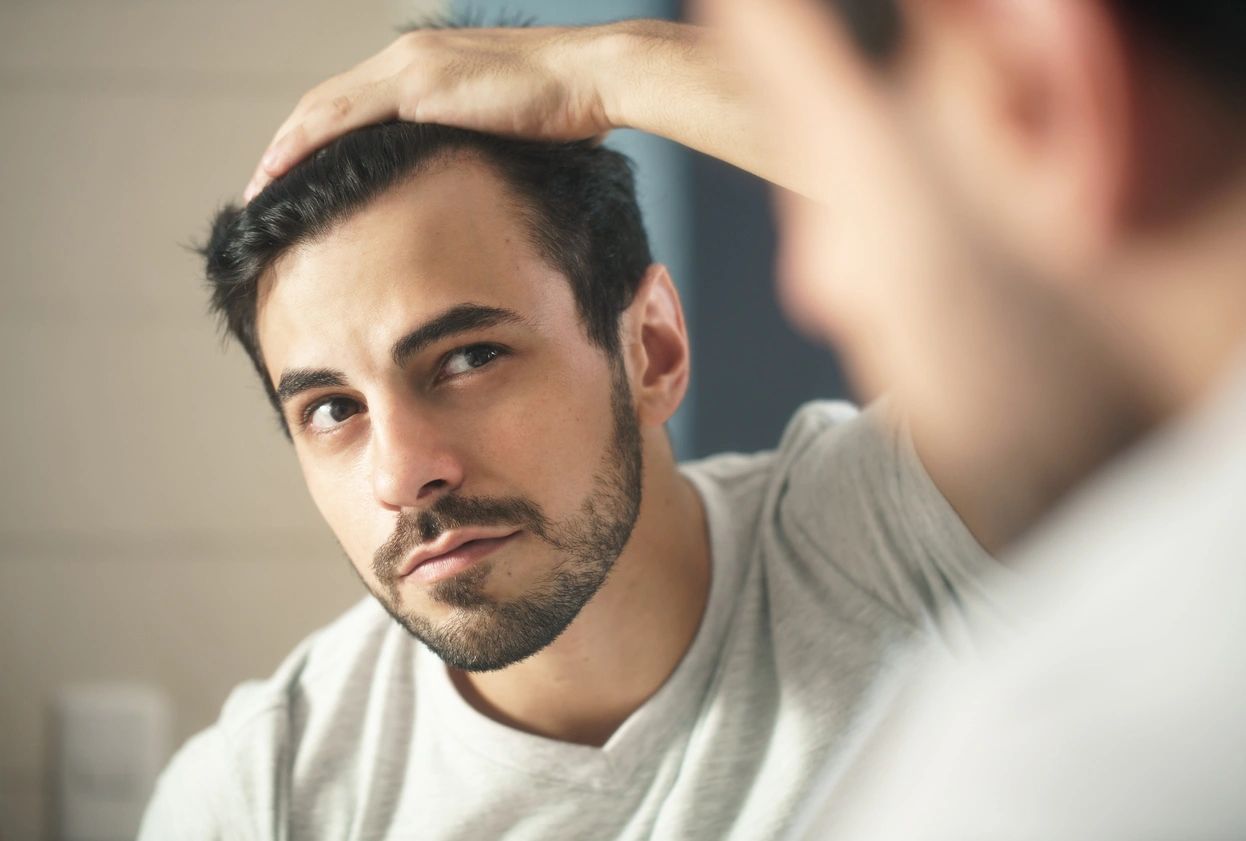 There are many situations that may lead a patient to consider seeking a hair transplant repair or revision.

The marketing clearance of Propecia is based on data from three one-year, double-blind, placebo-controlled, multicenter clinical trials involving 1,879 men aged 18 to 41 with mild to moderate hair loss of the vertex and anterior mid-scalp areas. In addition, 1,215 of the men who had hair loss at the vertex, or top of the head, were studied for another year.

Hair count increased during the first year and was maintained in those men taking Propecia for 24 months; men in the placebo group continued to show progressive hair loss. In an analysis of the men who were followed for up to two years, only 17% of men treated with Propecia demonstrated hair loss (defined as any decrease in hair count from baseline); 83% had the same or higher hair count. In contrast, 72%of the placebo group lost hair, as measured by hair count. Through questionnaires, all patients were asked to evaluate their response to treatment. Those on Propecia reported an increase in the amount of hair, a decrease in hair loss, and an improvement in appearance. Clinical improvement was seen as early as three months.

In another analysis, a panel of independent dermatologists evaluated photos in 508 patients after 24 months of treatment. An increase in hair growth was demonstrated in 66% of men treated with Propecia compared to 7% of men treated with placebo. Efficacy in bitemporal recession has not been established. All men, whether receiving Propecia or placebo, were given a medicated shampoo (Neutrogena T/Gel Shampoo).

“Propecia works by inhibiting the conversion of testosterone to DHT (dihydrotestosterone),” said Keith Kaufman, M.D., senior director, Clinical Research, Merck Research Laboratories in Rahway, N.J. “It is the first treatment to target this key factor in the development of androgenetic alopecia in those patients genetically predisposed.” 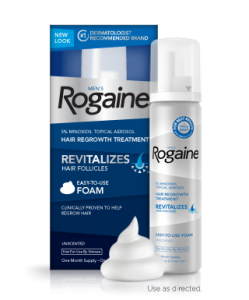 Rogaine Extra Strength contains 5% Minoxidil, the only FDA-approved topical treatment for hair loss. In clinical studies, four out of five users claimed Rogaine helped slow or stop their hair loss. Rogaine Extra Strength has 45% more regrowth than regular strength. This means that there is enhanced penetration of the hair follicle and significantly more hair growth. Results may occur in as soon as two months.

Rogaine is a topical liquid, not a systemic medication. That means it’s applied to the top of your scalp, instead of taken internally. You’ll be relieved to know that Men’s Rogaine Extra Strength works without altering male hormones.

Rogaine is applied directly to the scalp in the hair loss area twice daily. For example, once in the morning and once at night. The night-time application should occur two to four hours before bed to allow for drying. Each bottle should last about 25–30 days if used as directed. Hair can be styled normally after the Rogaine has dried. The twin pack contains two months’ supply of Rogaine. A small percentage of users, about 6%, experience scalp irritation.

Low-Level Light Therapy is believed to increase cell metabolism for thicker, more lustrous, and more durable hair. The Capillus272™ laser device is the best way to deliver LLLT to your scalp because it covers the entire region simultaneously and leaves no room for user error. The process is simple… just wear it under any hat of your choosing. It is completely portable so you can wear it as you go about your normal activities for a few minutes every other day or as instructed by your Capillus hair expert. Many patients prefer it because it won’t dirty their hair like some topical solutions for hair loss. The Capillus272™ Laser is the most powerful home-use device on the market with 272 lasers each with 5mW of power at 650 nm for a total power output of 1.360W.

The Capillus272™ is a low-level light therapy device that fits securely on your head, under any cap or hat of your choice. It is powered by a battery pack that clips to any belt or pant waist, allowing mobility and the ability to go about regular activities during use. It features 272 lasers at a low power wattage of 5mW and wavelength of 650 nm—which for its red color—and, according to the International Society of Hair Restoration Surgeons, is the laser light used for the treatment of pattern hair loss. 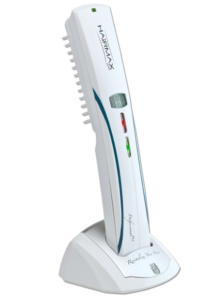 The HairMax LaserComb® laser hair loss treatment is a breakthrough in hair growth technology. FDA cleared*, clinically proven, and doctor recommended, this treatment makes hair loss and thinning hair an option rather than an unavoidable reality.

Please contact us to purchase this revolutionary technology to promote hair growth.

This is the first FDA-approved product for use at home.